These Women Have Class! 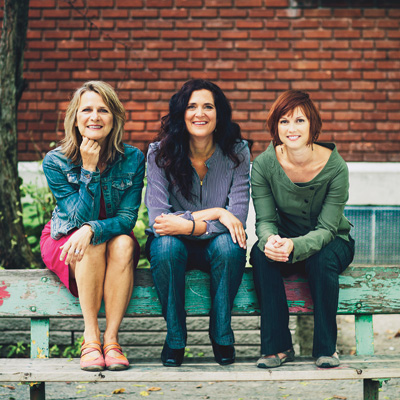 Translated from French by Jill Swan

They help youth to succeed and believe in themselves.

What do these three women have in common? Daphné Mailloux-Rousseau, Sandrine Faust, and Line St-Amour all share the same energy and inspiring dedication. They’re the type of people who make you wonder if you should have chosen a career helping people too. These three women of action come to the aid of many different young people, from damaged kids whose futures seem to end before they even get started, to gifted kids who always want to know more.

Allô Prof, the program that Sandrine Faust has been running for 14 years, helps elementary- and secondary-age children who need additional explanations to understand a particular concept, do their homework, or prepare for a test. The hundred or so teachers who work at the organization’s two locations in Montreal and Quebec City respond to questions about all subjects by phone, text, or online. They are always busy: last year, they counted 8.4 million requests, including many from adults returning to school to obtain their high school diploma.

“We’re the emergency doctors of the education system,” explains executive director Faust, who met us at the organization’s Montreal location. “We can handle small problems, but for more complicated issues, young people fall under the responsibility of larger resources in the education system.” A teacher at Allô Prof can spend three minutes or an hour answering a student inquiry: “There’s no time limit.”

A Haven for Youth

The five Boys & Girls Clubs of Canada that Line St-Amour oversees in Quebec welcome mainly underprivileged children for after-school programs. Although these students have not dropped out of school, many are at risk of doing so. At the Club, they have access to a variety of activities, such as basketball, gardening, cooking, discussions, community service, homework help, and leadership programs. “They feel safe and good here, sometimes more than at home,” she notes. The Club is a safe place where they find role models, which helps them stay off the streets.
St-Amour wants to make sure these children stay in school to create opportunities for the future, instead of dropping out to work full-time at a minimum wage job. “Our first mission is to give them extraordinary experiences, to challenge them so they develop to their full potential and become good citizens. The secondary goal is to maintain their ability to stick with their studies and graduate.”

When all else has failed, Ancre des Jeunes, headed by Mailloux-Rousseau, picks up the pieces. Every year, she helps 30 students between the ages of 13 and 20 who have dropped out of school to regain their appetite for learning. The education system can no longer help these teens because of the complexity of their problems, which can include learning disabilities, mental health issues, dysfunctional families, drug addiction, domestic violence, and bullying. Coming to Ancre des Jeunes in Verdun, with its smells of homemade soup served for lunch, is their last chance.

These youth have fallen through the cracks of the system, says Mailloux-Rousseau, as she takes us on a tour of the sprawling Ancre des Jeunes building, where they participate in workshops on stained glass, photography, woodworking, and jewellery-making. “Kids who show up here at the start of the school year are convinced that they’re not as smart as other kids, and they have a bunch of failures to prove it. They don’t have enough self-confidence to make eye contact or have a conversation. You’d think some of them had back problems, they’re so hunched over. Often, they haven’t just left school, they’ve left behind society, their families, their health.” Throughout the year, these survivors take individual classes with teachers while also taking part in psychosocial counselling and cultural activities. By June, they’ve regained their self-esteem and ability to learn about various subjects, from academic concepts to artistic skills. More than 80% are able to reintegrate into the mainstream school system.

What motivates these three exceptional women? For Mailloux-Rousseau, it is the feeling of having been born with advantages. “I was lucky: I had a lot of potential and I was able to develop it,” she says, noting that she was the type of child who cried when school ended for the summer and couldn’t wait for it to start again in September. “To have a just society, it takes people helping others who weren’t dealt the same cards in life to succeed.”

St-Amour sees herself in the youth who come to the Boys & Girls Clubs. As a teenager, she couldn’t see a future full of possibilities either. “I grew up in a place where we thought that university was only for really exceptional people, that you had to be part of a privileged elite to be accepted,” says the native Montrealer, who was raised in the east end of the city near the refineries. She finally got the courage to apply. “At an English-language university, even though I didn’t speak a word of English! I told myself that if I failed, I could blame it on not speaking the language.” But she didn’t fail. Today, St-Amour wants young people, like her, to overcome their limitations and discover how far they can go.

The Kids Are Alright!

Besides her love for education, Faust’s passion for entrepreneurship motivates her (as a child, she took selling dandelions and rocks very seriously!). In 1999, she saved the organization at the eleventh hour with a skilfully packaged business plan, and they’ve been doing well ever since. The number of inquiries increases by 40 to 50% per year. “I’ll leave when we have a growth rate of 0%. That’ll mean that all of Quebec’s youth know about Allô Prof and use our services!” In the meantime, she continues to “save lives.” “You know how teenagers exaggerate, but that’s what they tell us.”

And what about today’s youth? Creative, resourceful, open, and honest are just some of the words these three women use to describe them. According to Faust, she’s impressed by the academic subject matter. “If you compare their grade six workbooks to mine at the same age, I think it’s much harder today. They’re so good!” And when it gets tough, there are passionate people around to help them.